Ile-Bizard-Sainte-Genevieve borough is a peaceful environment located in the West part of the Island of Montreal. The borough is home to three golf courses, a nature park, many green spaces, great outdoors and a quiet residential atmosphere.

The borough is bordered by two recreational boating rivers. The Lac des Deux-Montagnes that circles the Ile-Bizard and the Riviere-des-Praires that flows along the north shore of the Sainte-Genevieve area.

Boroughs on shores such as L'Ile-Bizard–Sainte-Genevieve , Pierrefonds-Roxboro, Ahuntsic-Cartierville, Montreal-Nord and Riviere-des-Prairies–Pointe-aux-Trembles are most likely to be flooded. Residents do need to be aware of flooding risks and must always prepare.

A peaceful living environment and a predominantly young and family-oriented population that exerts constant pressure on the many services that must be provided, need to be provided to the residents by the borough and by the City of Montreal.

The city of Montreal is composed of 19 boroughs that each hold specific powers.

Many green spaces and parks such as the Bois-de-l'Ile-Bizard Nature Park.

And, many recreational facilities such as a public library and a "chalet scout" and gathering place loaned to the local scouts.

L'Ile-Bizard-Sainte-Genevieve borough is the least populated borough in the City of Montreal and the most bilingual.

In average, the local annual household income is clearly higher, half as high as the households of the City of Montreal. However, a commercial revitalization approach is required, especially in Sainte-Genevieve.

Sainte-Genevieve is where the income is equivalent to the rest of the City of Montreal and where ample space for new residential constructions is available.

The economy of L'Ile-Bizard-Sainte-Genevieve borough with its six islands, more than 500 waterside properties, close to 35 km of shoreline and over 350,000 square meters of waterside land is a lot about protecting the local environment.

Actions hostile to water do create harmful consequences such as an excessive proliferation of algae, a degradation of water, quality hazards to health, ongoing erosion of riverbanks and a decrease in market value of properties.

L'Ile-Bizard is characterized by its three famous golf courses. Golf Saint-Raphael with its two prestigious courses, the Royal Montreal Golf Club founded in 1873 and the Elm Ridge Country Club with its two 18-hole Championship courses.

And, Sainte-Genevieve is characterized by the very convenient Cégep Gérald Godin, a Quebec poet, a journalist and a politician.

Also Important are permits regarding construction work, ground or above-ground pools, dogs, cats, renovation work, tree felling, yard sales... along with a detailed and useful Citizen's Handbook prepared and made available by Richard Bélanger, a former mayor of the borough.

The borough or, more precisely the Sainte-Genevieve area is served by STM buses numbers 207, 407, 201 and 401 and by a public taxi system.

A Taxi collectif in French, Taxibus Service in English that offers the following services:

"Residents of L'Ile-Bizard can benefit from a Taxibus service running continuously from 6 A.M. to 10 P.M. They can also take advantage of additional hours of service to the Complexe Sportif Saint-Raphael." 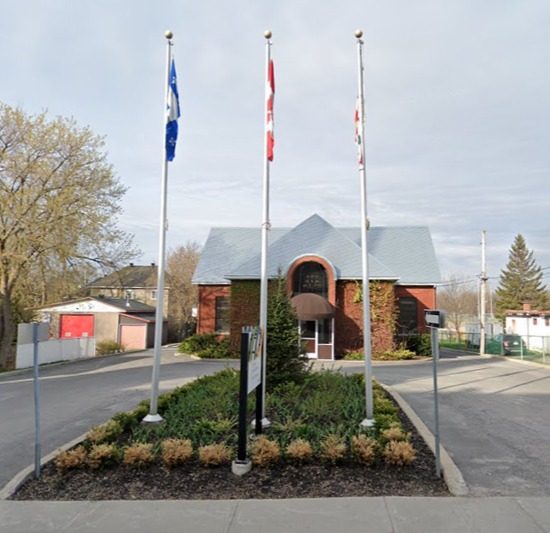 Built in 1965-66, the present bridge offers three lanes, a bike lane and a sidewalk but, the population grew over the past decades and the Jacques-Bizard Bridge is often if not always congested, especially during rush hours.

The bridge, unfortunately, is one of the most degraded structure of the Island of Montreal. Fortunately, a new bridge has been approved by previous mayor Denis Coderre and by the then executive committee of the City of Montreal.