The Town of Kirkland rapidly changed from its rural origins to a residential neighbourhood a lot because of the Trans-Canada Highway that officially opened in 1962.

An Highway that divides the Town into two parts but that also provides an easy access to downtown Montreal. In Kirkland, the industrial park is located on both sides of the highway, and the rest of the area is strictly residential.

Kirkland is a young and dynamic city naturally divided into four sectors along Highway 40.  Nowadays, it is mostly maintenance and redevelopment in Kirkland because its close to 400 industrial, commercial and institutional establishments have resulted in a shortage of available space for new constructions.

An interesting fact about Montreal West as one of the best small towns on the Island of Montreal is the CPR Block Tower at the Westminster Railway Crossing.

To celebrate the 100th anniversary of the Town of Montreal West, a Centennial Project was created and, in 1997, volunters from the community purchased and restored the CPR Block Tower that now houses a museum with artefacts and information about the many aspects of the Town.

Montreal West is an ideal place to work, live and play simply because of its small town quality of life and large City of Montreal close by convenience. A century-old community with quiet tree-lined streets and predominantly single family dwellings.

The Town of Mount Royal is a close-knit community acutely aware of global issues. Their "green town" extends east and west of the Décarie Expressway also called Highway 15. An expressway between the local industrial and residential sectors, with retail businesses on both sides.

Mount Royal residents are resolutely active. They play all kinds of sports and enjoy going on family outings. Dancing, swimming and gardening where melon fields once stood many years ago are some of their favorite activities. 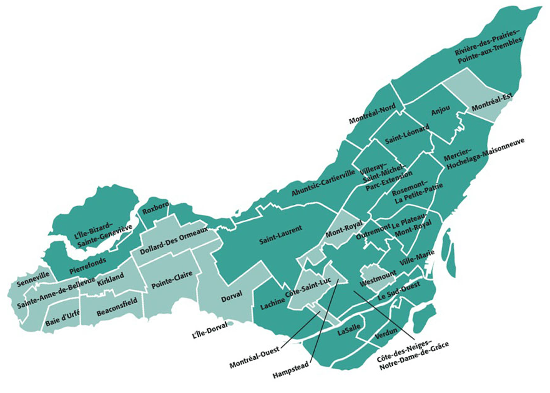 The Town of Kirkland is surrounded by Pierrefonds-Roxboro, Dollard-des-Ormeaux, Pointe-Claire, Beaconsfield, Baie d'Urfé and Sainte-Anne-de-Bellevue.

The Town of Montreal West is surrounded by Lachine, Côte-Saint-Luc, Côte-des-Neiges-Notre-Dame-de-Grâce, Le Sud-Ouest and LaSalle.

The Town of Mount Royal is surrounded by Saint-Laurent, Villeray-Saint-Michel-Parc-Extension, Outremont and Côte-des-Neiges-Notre-Dame-de-Grâce.