This particular Montreal geography information takes us back to the first decade of the new millennium or, more precisely, to the beginning of the 2000s. Up until those years, the Island of Montreal was composed of one City of Montreal and 27 smaller cities, all governed by the Montreal Urban Community, the MUC.

An MUC that was then a Quebec regional government with services and responsibilities that included police protection, urban planning and sewage treatment.

In 2000 the MUC was replaced by the Montreal Metropolitan Community, a MMC now responsible for coordinating Montreal, Longueuil, Laval and all the other suburban cities of the metropolitan area.

During those years, the amalgamation of the City of Montreal and the 27 other independent cities of the Island of Montreal was a dream cherished by some of our municipal and provincial elected officials.

Mayor Drapeau from the Parti civique was very much in favor of such a merger but his proposition was strongly opposed by many residents and some elected officials.

The Island of Montreal in 2001 - Wikipedia

In 2001, Lucien Bouchard Quebec Prime Minister from the Parti Québécois (PQ) was the first elected official to announce a plan. As prime minister of the province of Québec, he chose to create one large municipality by merging the then 28 cities of the Island of Montreal into one mega City of Montreal divided into 27 boroughs.

Pierre Bourque from Vision Montréal endorsed the eventual unsuccessful attempt proposed by Lucien Bouchard and it cost him his 2001 election as mayor of the City of Montreal Quebec.

The next year, in 2002, Bernard Landry Quebec Prime Minister also from the Parti Québécois (PQ) forcibly merged the entire Island of Montreal into one single mega city. As a result, every cities and several remote islands all became a rather large City of Montreal.

In 2002 the City of Montreal and the 27 other cities of the Island of Montreal officially became one City of Montreal Quebec divided into 27 boroughs named after their former city or district names. A series of Montreal geography information seen by some as a badly diagnosed problem with a wrong remedy.

During the same time, mayor Gérald Tremblay from Union Montreal and his administration decentralized this new mega city and gave more power to each borough and to their respective mayors and elected officials.

The Island of Montreal in 2002 - Wikipedia

Later, during the 2003 provincial elections, Jean Charest from the winning Parti Libéral Québécois (PLQ) promised to submit each borough and each merger to a referendum.

In 2004, and as promised, a referendum took place and some of the former cities  of the Island of Montreal voted to de-merge from the mega Montreal Quebec City recently created and to regain their respective municipal status.

The de-mergers came into effect in 2006. Consequently, some of the previously independent cities regained most of their independence, but they did not regain all the powers they had before the merger of 2002.

The Island of Montreal in 2006 - Wikipedia

The debate regarding a municipal amalgamation, a new dissolution or the continuation of the Island of Montreal as it is now could resurface any day. Many of the same Montreal geography information are still discussed by some.

Some claim that the de-merged cities are satisfied with their situation and that their finances are better managed. Others believe that municipal mergers are a failure and that the benefits did not materialize. According to some, citizens are, in economical information and comparisons, better served in small municipalities. 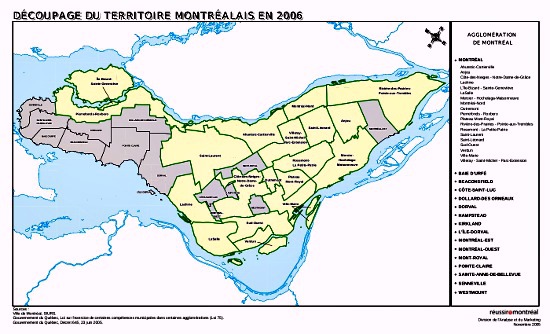 Also mentioned is the potential merger of LaSalle and Lachine as well as the annexation of the western part of Rivière-des-Prairies-Pointe-aux-Trembles to Montreal-Nord to simplify service delivery.

Let's just say that the controversy is still present and the debate is far from being over. Montreal geography information and controversies about mergers and de-mergers of not so so long ago could very well start all over again.

The history of Montreal begins with the discovery of the Iroquoian Hochelaga village in the sixteenth century by French explorers and both, geography and history continue to evolve.

Discovering the many aspects that characterize Montreal and Montrealers

Montreal Kits © All Rights Reserved 2013-2020
The content of this Montreal Kits website is for information purposes only and has no legal value.